Australia's contribution in Afghanistan was a substantial one. It includes a Reconstruction Task Force of some 400 personnel, a Special Operations Task Group of around 300 Special Forces soldiers, an Air Force Control and Reporting Centre, a Rotary Wing Group, logistics support and a national Command Element.

41 Australian soldiers have been killed and 261 wounded (including two sailors and one airman), the majority since October 2007.

After the terrorist attacks against the United States (US) on 11 September 2001, Australia joined the US-led International Coalition against Terrorism (the Coalition) by committing military assets and personnel to Coalition operations in Afghanistan—the US-led action is known as Operation Enduring Freedom (OEF–A)

OEF-A commenced on 7 October 2001 when the US and allied nations conducted military operations against al-Qa’ida and Taliban targets in Afghanistan. On 14 September 2001, the Australian Government cited the terrorist attacks against the US as sufficient basis for invoking the mutual-defence clauses of the ANZUS Treaty. This was the first time the Treaty’s clauses on acting to meet a common danger had been invoked since it was enacted in 1952. Parliament supported this decision on 17 September 2001.

The Australian contribution to the war in Afghanistan has been known as Operation Slipper (2001-2014) and Operation Highroad (2015-2021). Australian Defence Force operations and the size of the forces deployed have varied and ADF involvement has included two major areas of activity: Afghanistan and the Persian Gulf.  These activities have seen the deployment of naval, air and land forces that have taken part in combat and combat support operations as part of the International Security Assistance Force (ISAF).

In mid-2014, the naval and logistic support operations in the Persian Gulf were re-designated as Operation Manitou and Operation Accordion respectively.

Australian soldiers from the Special Operations Task Group board a U.S. Army Black Hawk helicopter after a mission in Uruzgan province, 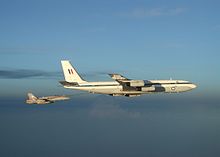 There were approximately 400 Australian Defence Force personnel deployed within Afghanistan.

In 2014, ADF personnel were engaged in Afghanistan through training and advising the Afghan National Security Forces in Kabul and Kandahar.

Through to the end of 2014, Australia was providing instructors, advisors and support staff to the UK-led Afghan National Army Officer Academy in Kabul, which included a force protection platoon.

We had advisor and support staff working with the Australian-led Afghan National Army 205 Corps Coalition Advisory Team in Kandahar.

We supported logistics training with the Logistics Training and Advisory Team in Kabul and we committed a small number of Special Forces and other Army personnel to training and advising the General Directorate of Police Special Units.

In addition, the Royal Australian Air Force Heron Remotely Piloted Aircraft deployment provided Intelligence, Surveillance and Reconnaissance support to enhance security in Regional Command - South during the lead up to, and conduct of, the elections.

Throughout 2014 Australia maintained its cadre of embedded personnel at ISAF Joint Command and Regional Command - South. 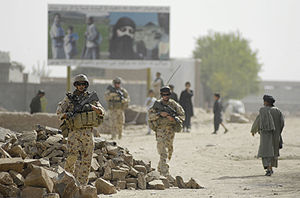 Operation Slipper is notable for the first Australian combat deaths since the Vietnam War, and to date all casualties have occurred during operations in Afghanistan. 41 Australian soldiers have been killed and 261 wounded, the majority since October 2007.

Operation PALATE II was ADF contribution to the United Nations Assistance Mission to Afghanistan (UNAMA). UNAMA is a political mission which was established on 28 March 2002 by UN Security Council Resolution 1401 to promote reconciliation and rapprochement, and manage humanitarian relief, recovery, and reconstruction in Afghanistan.

Two Australian Army Officers served as military advisers within the UNAMA Military Adviser Unit. Their duties included maintaining contact and liaison with all military forces throughout Afghanistan on behalf of UNAMA. The ADF officers were based in Kabul and Kandahar.

A contingent of around 80 ADF personnel remained in Afghanistan as late as 2021 to train and advise Afghan forces.[30] The Australian embassy in Kabul was closed on 28 May that year. The last ADF personnel and diplomats in Afghanistan departed on 18 June 2021. This formed part of the withdrawal of international forces from the country.

Following the fall of Kabul in August 2021, ADF personnel were used to evacuate Australians and Afghans who had assisted the Australian forces from Afghanistan. Three RAAF aircraft and 250 personnel were deployed from Australia to the Middle East as part of this effort. The first evacuation flight from Kabul took place on the night of 17/18 August 2021. Prime Minister Scott Morrison stated that it would not be possible to evacuate all the Afghans who had assisted the Australian forces due to the situation in the country.