2023 will commemorate 57 years since the Battle of Long Tan,

The Vietnam Veterans & Veterans MC - Gippsland Chapter would like to invite
all interested persons to help us commemorate this day.

Service will start at 2pm sharp, followed by refreshments.

Anyone is welcome to lay a wreath.  Please let our Secretary know prior.

This is an open day everyone is welcome

Vietnam Veterans Day,  is a day to remember and honour those men and woman
who died in military service for our country.

These Soldiers, Sailors,  and Airmen made the ultimate sacrifice; they and
their families deserve, at the very least, a quiet moment of thanks this V.V. D.

It should also be a time for reflection and appreciation the sacrifices of our living Veterans who have also served, particularly those who have been wounded in combat. Whether or not you support the wars, any wars, it is undeniable that we owe these service men and women, of all conflicts, a debt of gratitude.

In addition, many Vets come home with invisible wounds. These wounds haunt them and their families every day.

Post-Traumatic Stress Disorder (PTSD), Traumatic Brain  Injury (TBI) or a combination of both.

Vietnam Veterans' Day, celebrated in Australia on the 18th of August each year, remembers those
Australians and New Zealanders who served during the Vietnam War and
also commemorates the Battle of Long Tan, it gives us  an opportunity to stand as one and
remember those who did not come home.

Also those that today still pay a price for their service in Vietnam.

We also remember all our allies that gave of themselves in Vietnam.

One of the most well-known Australian engagements of the Vietnam War was the
Battle of Long Tan, 17-20 August 1966.

The battle saw the action of 108 ANZACS against a Viet Cong (North Vietnamese) force
estimated between 1,500 and 2,500.

few battles in the recorded history of the world to be won against such odds.

The Vietnam War was also the first war witnessed 'live' on television.

NOT EVERYONE WHO LOST HIS LIFE IN VIETNAM DIED THERE,

NOT EVERYONE WHO CAME HOME FROM VIETNAM LEFT THERE.

This is not only relevant to Vietnam Veterans, it is true for all military personal that
have served overseas in all wars and conflicts 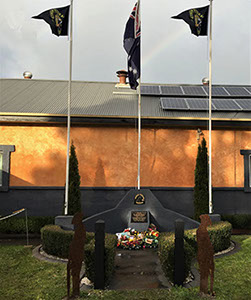 Thank you Russell & Gary for your continued support