The question a lot of Australians have asked over the last 40 odd years is WHY?

This story is to help people understand a little about who we are.

All comments on this page are on public record and were not written by the VVMC Gippsland Chapter.

The Vietnam War was the longest twentieth century conflict in which Australians participated; it involved some 60,000 personnel and grew from a limited initial commitment of 30 military advisers in 1962 to include a battalion in 1965 and finally, in 1966, a task force. Each of the three services was involved, but the dominant role was played by the Army. After the cessation of combat operations in 1972, a limited number of Australian personnel remained in Vietnam, and elements of the RAAF returned in 1975, carrying out evacuations and assisting refugees almost until the moment of South Vietnam's surrender.

In the early years Australia's participation in the war was not widely opposed. But as the commitment grew, as conscripts began to make up a large percentage of those being deployed and killed, and as the public increasingly came to believe that the war was being lost, opposition grew until, in the early 1970s, more than 200,000 people marched in the streets of Australia's major cities in protest.

By this time the United States Government had embarked on a policy of 'Vietnamisation' - withdrawing its own troops from the country while passing responsibility for the prosecution and conduct of the war to South Vietnamese forces. Australia too was winding down its commitment and the last combat troops came home in March 1972. The RAAF, however, sent personnel back to Vietnam in 1975 to assist in evacuations and humanitarian work during the war's final days. Involvement in the war cost more than 500 Australian servicemen their lives, while some 3,000 were wounded, otherwise injured or were victims of illness.

The South Vietnamese fought on for just over three years before the capital, Saigon, fell to North Vietnamese forces in April 1975, bringing an end to the war which by then had spilled over into neighbouring Cambodia and Laos. Millions lost their lives, millions more were made refugees and the disaster that befell the region continues to reverberate today. For Australia the Vietnam War was the cause of the greatest social and political dissent since the conscription referenda of the First World War.

Australian support for South Vietnam in the early 1960s was in keeping with the policies of other nations, particularly the United States, to stem the spread of communism in Europe and Asia. In 1961 and 1962 Ngo Dinh Diem, leader of the government in South Vietnam, repeatedly requested security assistance from the US and its allies. Australia eventually responded with 30 military advisers, dispatched as the Australian Army Training Team Vietnam (AATTV), also known as "the Team". Their arrival in South Vietnam during July and August 1962 was the beginning of Australia's involvement in the Vietnam War. In August 1964 the Royal Australian Air Force (RAAF) also sent a flight of Caribou transports to the port of Vung Tau.

By early 1965, when it had become clear that South Vietnam could not stave off the communist insurgents and their North Vietnamese comrades for more than a few months, the US commenced a major escalation of the war. By the end of the year it had committed 200,000 troops to the conflict. As part of the build-up, the US government requested further support from friendly countries in the region, including Australia. The Australian government dispatched the 1st Battalion, Royal Australian Regiment (1RAR), in June 1965 to serve alongside the US 173d Airborne Brigade in Bien Hoa province.

The following year the Australian government felt that Australia's involvement in the conflict should be both strong and identifiable. In March 1966 the government announced the dispatch of a task force to replace 1RAR, consisting of two battalions and support services (including a RAAF squadron of Iroquois helicopters), to be based at Nui Dat, Phuoc Tuy province. Unlike 1RAR, the taskforce was assigned its own area of operations and included conscripts who had been called up under the National Service Scheme, introduced in 1964. All nine RAR battalions served in the task force at one time or another, before it was withdrawn in 1971; at the height of the Australian involvement it numbered some 8,500 troops. A third RAAF squadron (of Canberra jet bombers) was also committed in 1967, and destroyers of the Royal Australian Navy (RAN) joined US patrols off the North Vietnamese coast. The RAN also contributed a clearance diving team and a helicopter detachment that operated with the US Army from October 1967.

In August 1966 a company of 6RAR was engaged in one of Australia's heaviest actions of the war, in a rubber plantation near Long Tan. The 108 soldiers of D Coy held off an enemy force, estimated at over 2000, for four hours in the middle of a tropical downpour. They were greatly assisted by a timely ammunition resupply by RAAF helicopters, close fire support from Australian artillery, and the arrival of reinforcements in APCs as night fell. The armoured vehicles had been delayed because they had to ‘swim’ across a flooded creek and fight through groups of enemy on the way. When the Viet Cong withdrew at night fall they left behind 245 dead, but carried away many more casualties. Seventeen Australians were killed and 25 wounded, with one dying of wounds several days later.

The year 1968 began with a major offensive by the Viet Cong and North Vietnamese Army, launched during the Vietnamese lunar new year holiday period, known as "Tet". Not only the timing but the scale of the offensive came as a complete surprise, taking in cities, towns, and military installations throughout South Vietnam. While the "Tet Offensive" ultimately ended in military defeat for the communists, it was propaganda victory. US military planners began to question if a decisive victory could ever be achieved and the offensive stimulated US public opposition to the war. For Australian troops, the effects of the offensive were felt around their base at Nui Dat, where a Viet Cong attack on targets around Ba Ria, the provincial capital, was repulsed with few casualties. 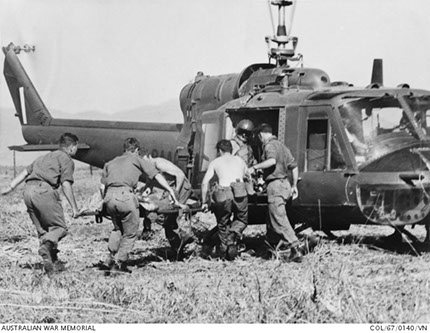 By 1969 anti-war protests were gathering momentum in Australia. Opposition to conscription mounted, as more people came to believe the war could not be won. A "Don't register" campaign to dissuade young men from registering for conscription gained increasing support and some of the protests grew violent. The US government began to implement a policy of "Vietnamisation'', the term coined for a gradual withdrawal of US forces that would leave the war in the hands of the South Vietnamese. With the start of the phased withdrawals, the emphasis of the activities of the Australians in Phuoc Tuy province shifted to the provision of training to the South Vietnamese Regional and Popular Forces.

A wounded digger, hurt in a booby-trap explosion,
is evacuated by chopper to Vung Tau.

At the end of April 1970 US and South Vietnamese troops were ordered to cross the border into Cambodia.  While the invasion succeeded in capturing large quantities of North Vietnamese arms, destroying bunkers and sanctuaries, and killing enemy soldiers, it ultimately proved disastrous. By bringing combat into Cambodia, the invasion drove many people to join the underground opposition, the Khmer Rouge, irreparably weakening the Cambodian government.  When the Khmer Rouge came to power in April 1975, it imposed a cruel and repressive regime that killed several million Cambodians and left the country with internal conflict that continues today.  The extension of the war into a sovereign state, formally neutral, inflamed anti-war sentiment in the United States and provided the impetus for further anti-war demonstrations in Australia.  In the well-known Moratorium marches of 1970 and 1971, more than 200,000 people gathered to protest against the war, in cities and towns throughout the country. 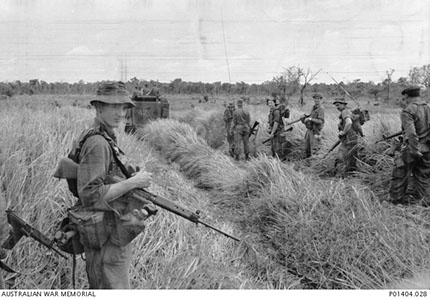 By late 1970 Australia had also begun to wind down its military effort in Vietnam.  The 8th Battalion departed in November (and was not replaced), but, to make up for the decrease in troop numbers, the Team's strength was increased and its efforts became concentrated in Phuoc Tuy province.  The withdrawal of troops and all air units continued throughout 1971 – the last battalion left Nui Dat on 7 November, while a handful of advisers belonging to the Team remained in Vietnam the following year.  In December 1972 they became the last Australian troops to come home, with their unit having seen continuous service in South Vietnam for ten and a half years.  Australia's participation in the war was formally declared at an end when the Governor-General issued a proclamation on
11 January 1973.  The only combat troops remaining in
Vietnam were a platoon guarding the Australian embassy
in Saigon (this was withdrawn in June 1973).

In early 1975 the communists launched a major offensive in the north of South Vietnam, resulting in the fall of Saigon on 30 April. During April a RAAF detachment of 7–8 Hercules transports flew humanitarian missions to aid civilian refugees displaced by the fighting and carried out the evacuation of Vietnamese orphans (Operation Babylift), before finally taking out embassy staff on 25 April. 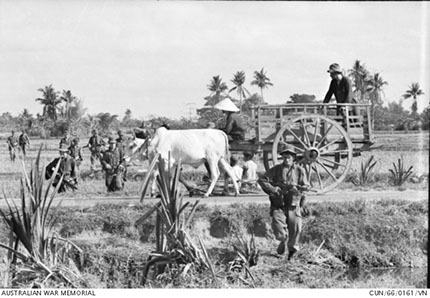 From the time of the arrival of the first members of the Team in 1962 almost 60,000 Australians, including ground troops and air force and navy personnel, served in Vietnam; 521 died as a result of the war and over 3,000 were wounded. The war was the cause of the greatest social and political dissent in Australia since the conscription referendums of the First World War. Many draft resisters, conscientious objectors, and protesters were fined or gaoled, while some soldiers met a hostile reception on their return home.

Australians patrol near the village of Tan Phu, near Bien Hoa Air Base.