It was the first major war of a larger conflict, the Cold War. The Cold War was a political, economic and military contest between the two post-war superpowers, the United States of America and the Union of Soviet Socialist Republics (Soviet Union). The Republic of Korea (south) was supported by the United States which persuaded the United Nations to side with her. Australia was one of the 21 members of the United Nations which sent military forces to aid the south. The Democratic People's Republic of Korea (north), was backed by China and the Soviet Union.

The Korean War began on 25 June 1950 when communist North Korea launched an invasion of South Korea.

The Australian Government quickly became involved in the war, committing personnel from the Navy, Army and Air Force to fight as part of a United Nations force.  Fighting in the Korean War ended with the signing of an armistice on 27 July 1953. Post-armistice, Australian forces remained in Korea in a peace-keeping role until 1957.

More than 18,000 Australians sailors, soldiers and airmen served during  the Korean War, including some 50 nurses. Of those more than 1500 were injured, 340 killed, 30 taken prisoner and 43 who are still listed as missing in action.

The USA lost more than 36,000 people. Millions of Korean and Chinese soldiers and civilians were killed.  North and South Korea still remain in a state of conflict today.

The Armed Forces in the Korean War

Over six million soldiers, sailors and airmen fought on both sides in the Korean War... 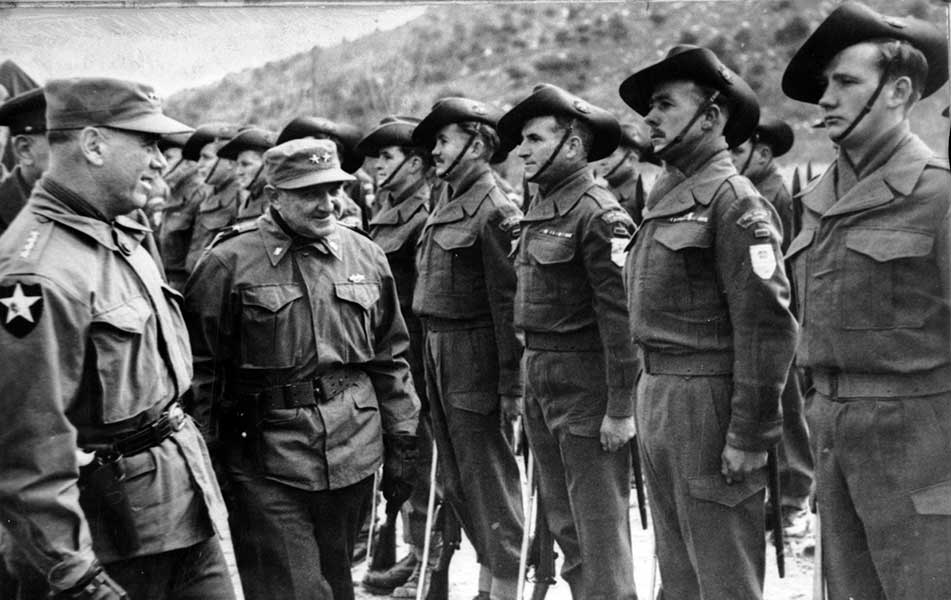 More than three million of these were communists from North Korea, China and Russia. Opposing them were almost three million from South Korea and from 21 United Nations (UN) countries including Australia.

Not all of the six million were present at one time. The war began with only 200,000 North Koreans fighting 100,000 South Korean personnel. With the arrival of the UN, and later the Chinese armies, there were a million combatants present one year after the war began. By war's end there were more than two million ranged along the ceasefire line – 1,100,000 UN and South Koreans facing 1,200,000 North Koreans and Chinese. The Soviet Union's contribution was always small and included medical units from the Soviets' allies Hungary, Czechoslovakia, Poland, Bulgaria and Romania.

There is a constant flow of personnel in and out of armed forces. Newly trained arrivals are needed to replace losses from battle and sickness. Also personnel often serve a period in the theatre of war and then return home to rest, and are replaced by new troops. The Chinese army for instance, was never stronger than 900,000 at any one time, yet 2,200,000 Chinese served in Korea. The personnel of UN army and air units usually served for one year and were then replaced. This does not mean the unit itself always left the country. The Royal Australian Air Force's 77 Squadron served in Korea throughout the war but its members were replaced several times over in the course of the conflict. Ships of the Royal Australian Navy (RAN) served from six months to a year in Korean waters before returning to Australia. In this way nine RAN ships served there, but not more than two at a time. Of the 17,000 Australians who fought in the Korean War, there were never more than 4000 present at any moment.

The very increase in the size of the armed forces contributed to the stalemate of the last two years of the war. In the early manoeuvre phase the armies were too small to hold a strong line across the 250-kilometre wide peninsula so an enemy attack leading to a breakthrough was often possible. Later armies of more than a million on each side found the line could be strongly held all along its length, and a breakthrough became impossible or too expensive in lives.

When North Korea invaded South Korea the RAN had two destroyers, Bataan and Warramunga attached to the British Commonwealth Occupation Force in Japan...

On 29 June they were allocated to UN forces and on 1 July HMAS Shoalhaven began patrol and escort operations in the Yellow Sea with Commonwealth forces under Rear Admiral Andrewes RN. They first engaged the enemy when Bataan bombarded a shore battery northwest of Inchon on 1 August. Over the next three years, and into the tense post-Armistice period, the RAN maintained two ships on station as well as deploying an aircraft carrier. Some 4500 RAN personnel saw service in Korea. Five were killed and six wounded.

Australian warships operated right around the Korean coast. There were no traditional naval battles – control of the seas was firmly held by the UN forces which exploited that control. The RAN destroyers and frigates blockaded the coast, landed and supported raiding parties, supplied isolated UN forces, bombarded coastal targets and escorted larger ships. There was a constant threat from North Korean sea mines, especially during the evacuations of Hungnam and Wonsan in December 1950.

Warramunga and Bataan took part in the Inchon landing and later returned there to harass advancing Chinese forces after their intervention in the war. On 5 February 1951 she ambushed a North Korean force that, by deception, attempted to lure her inshore.

In September 1951 the frigate Murchison operated in the restricted, fast-flowing tidal waters of the Han River, engaging enemy batteries at close range and taking several hits. The operational highlight for the RAN was undoubtedly the deployment of the carrier Sydney, which replaced HMS Glory in October 1951. To January 1952 she carried out seven patrols, each of nine flying days, punctuated by replenishment periods. She operated on both east and west coasts, alternating with American carriers. Her air group of 22 Sea Fury and 12 Firefly fighter bombers flew 2366 sorties, attacking enemy road and rail communications, as well as conducting armed reconnaissance, gunfire spotting and army cooperation missions. Combat air patrols were uneventful. Sydney's peak effort, on 11 October saw 89 sorties flown. Rough weather and snow often made for poor flying conditions. During Typhoon Ruth, on 14–15 October, the ship was damaged, one aircraft was lost overboard and seven more written off.

Postwar, the RAN continued Armistice patrols until 1955, including a second tour by Sydney.

RAN ships in the Korean War

RAN squadrons in the Korean War

All Royal Australian Air Force (RAAF) units serving with the United Nations Command in Korea were administered by 91 Composite Wing...

The largest and best known RAAF unit was 77 Squadron. The Squadron was the sole combat element the RAAF committed to the Korean War. All other RAAF units remained based in Iwakuni in Japan, but they were frequently called upon to serve in Korea. These units were 491 Maintenance Squadron, 391 Base Squadron and 30 Communications Flight which later became 36 Transport Squadron.

In June 1950, having served on occupation duties in Japan since early 1946, No. 77 Squadron's personnel and their families were preparing to return to Australia. Instead of a much anticipated homecoming the Squadron found itself thrust into the conflict on the Korean peninsula. Within days of the war's beginning Australian pilots were in action, escorting United States bombers and hitting ground targets.

We were basically doing interdiction work, armed reconnaissance and ground support roles.... We were after troop concentrations, transports, bridges, T34 tanks, self-propelled guns, gun emplacements, trains, railway tunnels and stores. Our main target was transport in the early days. If we could block transport on those very tiny roads coming down from North Korea into South Korea it saved the day, for a time anyway.

As risky as ground attack operations were, the war in Korea became more dangerous when in October 1950, Chinese forces entered the conflict. Having so far faced little aerial opposition, 77 Squadron's pilots now ran the risk of meeting Chinese MiG-15 jet fighters. As a consequence it was decided that 77 Squadron should be equipped with jets. The Squadron was withdrawn from operations to refit in April 1951 and flew Gloster Meteor jets for the remainder of the war.

Australian Army in the Korean War

Demobilisation and financial restrictions imposed since 1945 had resulted in an army that was barely capable of fielding one combat ready battalion. In 1950 the undermanned Australian element of the British Commonwealth Occupation Force in Japan was all that was available to meet the crisis in Korea. Due to constraints imposed by their terms of enlistment and the poor state of readiness of many of the occupation force soldiers, very few were available for immediate deployment. Unwilling to send what would have been a small and unprepared force into battle, the Army withheld committing any troops to Korea for several months. In the meantime the first-ever regular infantry units of the Australian Army had been formed with the 3rd Battalion Royal Australian Regiment (3RAR) being brought up to war strength and readied for service in Korea.

The soldiers of 3RAR were mostly Second World War veterans and all had volunteered for service in Korea. In October 1950 3RAR, operating as an integral battalion within the British Commonwealth 27th Brigade took part in the pursuit of the broken North Korean army after the Pusan breakout. Hard fighting followed as 3RAR along with all other UN forces contended with the Chinese intervention. In July 1951 the 1st Commonwealth Division was formed to which the Australian Army contributed two infantry battalions as part of the 27th Brigade which was later redesignated the 28th Brigade. The Korean War was above all an infantryman's war which the Australian battalions, composed as they were of veteran soldiers, engaged in with consistent competence. Even though Australians were offered few opportunities for higher operational command the Australian Army did provide the most senior leadership positions of the British Commonwealth forces in Korea with Lt. General Sir Horace Robertson being the first of four Australian Lt. Generals to fill that role. During the three years of the Korean War the Australian Army deployed 10,657 soldiers. Of these 276 were killed in action, 16 died from other causes, 1,210 were wounded in action and 23 became prisoners of war. One died while a prisoner. 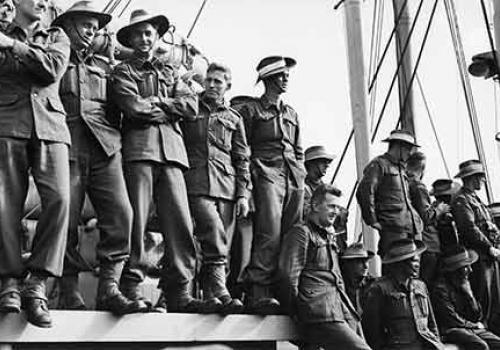 Members of the 3rd Battalion, the Royal Australian Regiment (3RAR) take in the view of Pusan harbour and lighthouse, from the deck of the US troopship Aiken Victory. From Pusan they will move on to Taegu to prepare for their first operations in the Korean War.