The Battle of Kapyong (22–25 April 1951), also known as the Battle of Jiaping, was fought during the Korean War between United Nations Command (UN) forces—primarily Canadian, Australian, and New Zealand—and the Chinese People's Volunteer Army (PVA).

The fighting occurred during the Chinese Spring Offensive and saw the 27th British Commonwealth Brigade establish blocking positions in the Kapyong Valley, on a key route south to the capital, Seoul. The two forward battalions—the 3rd Battalion, Royal Australian Regiment (3 RAR) and 2nd Battalion, Princess Patricia's Canadian Light Infantry (2 PPCLI)—were supported by guns from the 16th Field Regiment (16 Fd Regt) of the Royal Regiment of New Zealand Artillery along with a company of US mortars and fifteen Sherman tanks.

These forces occupied positions astride the valley and hastily developed defences. As thousands of soldiers from the Republic of Korea Army (ROK) began to withdraw through the valley, the PVA infiltrated the brigade position under the cover of darkness, and assaulted the Australians on Hill 504 during the evening and into the following day.

Although heavily outnumbered, the 27th Brigade held their positions into the afternoon before the Australians were finally withdrawn to positions in the rear of the brigade, with both sides having suffered heavy casualties. The PVA then turned their attention to the Canadians on Hill 677, but during a fierce night battle they were unable to dislodge them.

The fighting helped blunt the PVA offensive and the actions of the Australians and Canadians at Kapyong were critical in assisting to prevent a breakthrough against the UN central front, and ultimately the capture of Seoul. The next day the PVA withdrew back up the valley in order to regroup. The Canadian and Australian battalions bore the brunt of the assault and stopped an entire PVA division during the hard-fought defensive battle. Today, the battle is regarded as one of the most famous actions fought together by the Australian and Canadian armies in Korea. 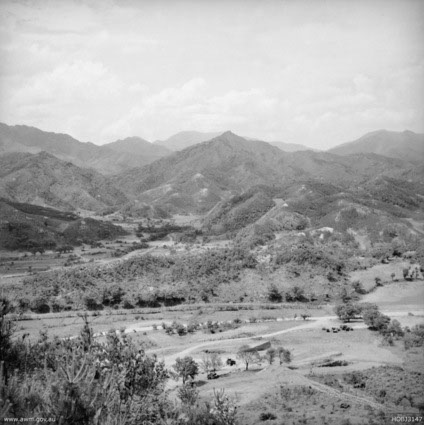 The 3rd Battalion  RAR were positioned in the Kapyong Valley as part of United Nations operation to establish a defensive buffer against a communist advance towards the South Korean capital Seoul.

On 22 April, the Chinese launched their spring offensive, routing the South Korean 6th Division and driving them back down the Kapyong Valley. The 27th Commonwealth Brigade advanced forward of the town of Kapyong. The 1st Battalion, Princess Patricia’s Canadian Light Infantry, and 3RAR dug in on the high ground on either side of a seven-kilometre wide valley.

The following day, the Chinese were engaged by the Australians and Canadians as well as a troop of US Army Sherman tanks and New Zealand Artillery. Two nights and days of close fighting followed and on the evening of 24 April the Australians were forced to withdraw from their positions and, with the support of the Canadians and New Zealand artillery, fought their way down a ridge, rejoining the majority of the brigade in the Kapyong valley.

On 23 April 1951, after breaking through forward positions held by the South Korean Army, Chinese forces assaulted United Nations defensive positions in the hills overlooking the Kapyong River, including those positions held by Australians on the north-west spur of Hill 504. During the night, wave after wave of Chinese troops attacked the Australian positions.

By the morning of 24 April elements of the Australian force had been forced to withdraw while others found themselves cut off up to four kilometres behind the most forward Chinese troops.

The Australians continued to resist throughout the day but were forced to make a fighting withdrawal under very difficult conditions and rejoin the remainder of the Commonwealth Brigade late in the day. 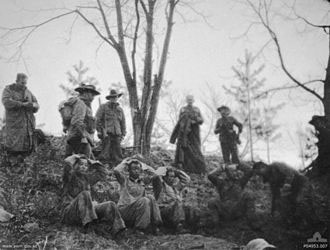 On 25 April the focus of the Chinese attack shifted to the positions held by the Canadian forces, who were able to deflect them with the assistance of the New Zealand artillery batteries whose fire had recently protected the Australians.

By the afternoon of 25 April the Chinese at Kapyong were exhausted and made no further attacks. The Commonwealth forces’ efforts had halted the Chinese advance.

The Chinese were stopped in their tracks and Seoul was saved from being attacked once more. The men of 3RAR suffered heavy casualties, with 32 Australians killed in the Battle of Kapyong, 53 were wounded and three were taken prisoner. The Australian and Canadian battalions were each awarded a United States Presidential Distinguished Unit Citation for their part in the Battle.

Following the battle, the 27th Brigade was withdrawn from Korea and 3RAR was taken on strength of the 28th British Commonwealth Brigade, part of the newly formed 1st Commonwealth Division.