In May and June 1968, astride the North Vietnamese/Viet Cong infiltration routes to Saigon, Australian units fought an intensive series of battles over a prolonged period around Fire Support Bases (FSB) Coral and Balmoral.

The Battle of Coral–Balmoral (12 May – 6 June 1968) was a series of actions fought during the Vietnam War between the 1st Australian Task Force (1 ATF) and the North Vietnamese 7th Division and Viet Cong Main Force units, 40 kilometres (25 mi) north-east of Saigon. Following the defeat of the communist Tet offensive in January and February, in late April two Australian infantry battalions—the 1st and 3rd Battalions of the Royal Australian Regiment (RAR)—with supporting arms, were again deployed from their base at Nui Dat in Phu?c Tuy Province to positions astride infiltration routes leading to Saigon to interdict renewed movement against the capital.

It was the largest and most prolonged operation for the Australian Task Force throughout the war.

This story is to help people understand a little about this part of the Vietnam War and Australian involvement.

by the VV&VMC Gippsland Chapter. 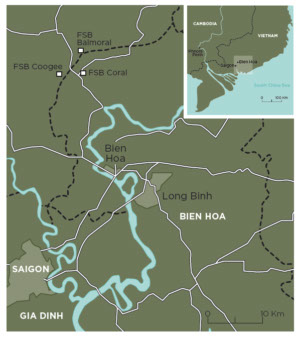 Fire Support Bases were designed to provide defended firing points for artillery and mortars to support infantry, armoured and cavalry units. Typically, indirect fire units (artillery and mortars) were inserted into an area that enabled the development of firing platforms to support patrolling activities throughout an area of operations.

Predominantly circular in design, fire support bases provided commanders greater flexibility and reach knowing they would have fire support that was not restricted to any single direction – guns and mortars were able to engage targets through a complete circle surrounding the base.

During the Second General Offensive launched by North Vietnamese forces in 1968, the 1st Australian Task Force deployed two infantry battalions – 1 RAR and 3 RAR- two artillery batteries – 102 Field Battery and 161 NZ Field Battery – mortars and support units, 45 kilometres north of Saigon and 60 kilometres north-west of the Australian Task Force base at Nui Dat to establish fire support bases astride enemy infiltration routes to Saigon. The Australians codenamed the area Surfers and further divided it into Bondi, Newport and Manly areas of operation each with a fire support base at their centre if required.

Deployment to Fire Support Base Coral on 12 May 1968 was beset by challenges from the beginning. Apart from the difficulties posed by the terrain, the area was thick with Viet Cong soldiers causing a visiting US General, whose troops had operated in the area previously, to remark ‘Tell your commanding officer that you won’t need to go looking for them. They’ll come looking for you.’ Additionally the two artillery batteries were placed more than 1.5 kilometers apart providing a huge area to defend.

Throughout the day Australian troops continued to arrive by helicopter and, by the time darkness fell, three companies of the 1st Battalion under the command of Lieutenant Colonel Phillip Bennett, were deployed 1,000 meters north and south of Coral in ambush positions. However, due to the delays earlier in the day, Coral was only partially completed leaving the troops dangerously exposed to attack. Some soldiers felt uneasy and would later recall a sense of foreboding. 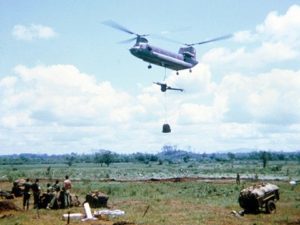 Meanwhile hundreds of enemy soldiers had formed up to the north-east of the base under cover of darkness, preparing to launch a series of battalion sized assaults around 4.00am on 13 May. The battle was fierce with genuine close quarter fighting and guns firing splintex rounds over open sights.

The North Vietnamese were able to penetrate the Australian perimeter, temporarily capturing a forward gun position and overrunning the mortar position. With the aid of extensive air support, by 6.30am the Australians managed to hold their position causing Captain John Bullen, a duty officer in the Nui Dat Command Post, to note in his diary ‘13/5/68 was the day that Australia nearly suffered its greatest catastrophe of the whole war. Although realized by very few at the time, the Task Force HQ … came within an ace of being wiped out by North Vietnamese Army. The political consequences of this would have been disastrous …’

At 2.30am on 16 May, Coral was again under attack from a North Vietnamese Army force. The base was by then defended by armoured personnel carriers of A Squadron, 3rd Cavalry Regiment and 1RAR’s rifle companies, all of which were heavily engaged during the battle. The attack lasted for four hours before it was driven back and resulted in five Australians being killed and 19 wounded.

Further attacks followed on 22, 26 and 28 May but were able to be dispersed and Coral was not seriously threatened again.

In the early hours of 26 May 1968, FSB Balmoral, occupied by 3RAR and reinforced with Centurion tanks, was attacked by the North Vietnamese. The unrelenting fire from D Company managed to halt the enemy at the wire perimeter of the base. A further attack on 28 May was the last attempt by the enemy to destroy the Australian bases and as in the previous assault, was again stopped on the wire perimeter. 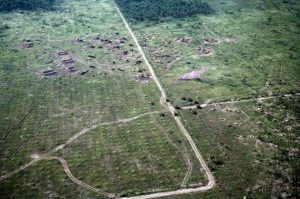 The North Vietnamese attack on Fire Support Base Coral had been the most continuous ground attack on an Australian position since the Second World War. Operations continued in the area for almost four weeks as the Australians fought some of the most persistent battles of the Vietnam War, resulting in 300 enemy soldiers killed and the subsequent postponement of a further attack on Saigon. The battle was the first time the Australians had clashed with regular North Vietnamese Army units operating in regimental strength in conventional warfare.

A total of 26 Australian soldiers died and 100 were wounded. This was the most casualties suffered by Australia in any one engagement in the Vietnam War and the units involved were later awarded one of the five battle honours approved for the Vietnam War. The honour title ‘Coral’ was also awarded to 102 Field Battery and 34 decorations were awarded to individual soldiers for their actions.

Australian forces at Coral were commanded by then Colonel Don Dunstan, later Governor of South Australia. Following the battle at Coral, Dunstan ordered 3 RAR to deploy to a position about 4.5 kilometers north, designating it Fire Support Base Balmoral. The purpose? To provoke another Viet Cong attack.

In a departure from the normal helicopter insertion, the Commanding Officer of 3 RAR, Lieutenant Colonel Jim Shelton, sent his advance troops to the area on foot on 24 May with Armoured Personnel Carriers in support. Four Centurion tanks would join the battalion group the following day, the first real occasion armour and infantry forces would operate together since World War II.

In the early hours of 26 May the Viet Cong attacked Balmoral across open ground that amazed the Australians. Supported by US gunships, the attack was defeated by 5am. Later that morning, soldiers from 1 RAR, who had accompanied the tanks during their move from Coral to Balmoral, conducted the first infantry/armoured assault since World War II on a bunker system between the two fire support bases. The tanks’ main armaments were used in a bunker busting role destroying at least 14 before they were ordered to return to Coral.

On the morning of 28 May the Viet Cong again attacked Balmoral to be met by canister fire from within the fire support base, and withering fire from US gunships. In what was described as ‘a withering mad minute’ fire from the gunships, tanks, armoured personnel carriers, machine guns and rifles, halted the Viet Cong attack.

Despite the near run thing that was the Battle of Fire Support Bases Coral and Balmoral, Australian troops proved themselves worthy of their forefathers in previous conflicts. Defined by resilience, courage, tenacity and a flat refusal to yield in the face of overwhelming odds, they defeated an enemy hell bent on defeating them.

And yet, the Australia sense of humour was ever present.

The same Captain Bullen who dutifully recorded how close the Task Force was to defeat on 13 May had previously recorded a radio conversation he had while on duty in Nui Dat with a helicopter pilot who had requested permission to shoot ‘six cattle north of Nui Thi Vai’.

“Why do you want to shoot them?” Bullen asked.

“How can you divine the political beliefs of a cow when you’re in an aircraft and the cow’s on the ground?”

“If we don’t kill the cattle, the Viet Cong will eat them, so let’s get in first.”

“What, and kill the poor beasts in case someone else does?  Fair go mate.”

“May I engage with machine-gun fire?”

“What!  Are you Viet Cong or bloody RSPCA?”

The pilot was eventually given permission to shoot the cattle by a more senior officer, but to Bullen’s great pleasure the pilot reported only two were slain, the remaining four escaped!