The Battle of Binh Ba, fought 50 years ago on June 6 and 7, 1969 was a key moment in the history of Australian operations in Vietnam and is a prime example of combined arms and joint operations in general, and infantry and armour cooperation in particular.

In 1969, Australia had reached its peak commitment of around 7,000 troops to the conflict in South Vietnam. The 1st Australian Task Force (1ATF) had responsibility for the province of Phuoc Tuy, south-east of Saigon, where it worked closely with South Vietnamese forces conducting security, cordon and search, and resettlement and rebuilding operations. 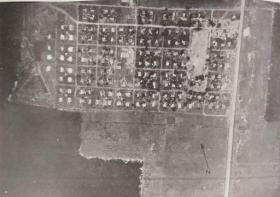 The primary base for 1ATF was at Nui Dat, a small hill in the middle of the province, away from urban centres but close to a few small villages and hamlets. On the morning of 6 June, 1969, a Centurion tank and an armoured recovery vehicle (ARV) were moving north along the main route to the nearby Fire Support Patrol Base (FSPB) Virginia to replace and recover two tanks that had maintenance difficulties and bring them back to the Task Force base. This took them past the small hamlet of Binh Ba a mere 5000 metres north of the base. It was here that a rocket propelled grenade (RPG) was fired at them and which would initiate one of the most significant battles of the war for the

Task Force Binh Ba (see image Battle of Bin Ba: 1) was a rectangular settlement owned by French plantation managers and home to somewhere between 1,000 and 1,300 people. Although the Australians originally felt they were winning over the town's population, by 1969 it was firmly sympathetic to the communist forces. Furthermore, the events of the morning of 6 June established that the town was a significant threat to 1ATF.

After the contact, the armoured vehicles continued to the FSPB but sent a contact report to the base at Nui Dat. Helicopter surveillance by 161 Independent Recce Squadron reported that it was likely that two platoons of Viet Cong were stationed in the town. A Ready Reaction Force (RRF) – comprising four different force elements: the under-strength D company 5RAR; four Centurion tanks; a troop of M113A1 Armoured Personnel Carriers (APCs); and a battery of six M2A2 howitzers in direct support – prepared to respond. It was decided that a sweep of the town was necessary in order to clear the enemy.

The Centurion tanks were a critical part of the RRF, and of 1ATF as a whole. Prior to the arrival of the tanks, APCs had increasingly been utilised for a number of different roles, many of which were unsuitable and placed troops at risk. From 1967 1ATF was bolstered by the arrival of heavy armour from the 1st Armoured Regiment.

At around 11:20 am, the RRF formed up at Nui Dat. The South Vietnamese district chief gave permission for the 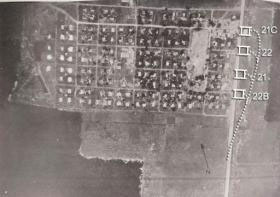 Australians to attack the village, and ordered civilians to evacuate. As the Australians advanced towards the village, they saw enemy soldiers moving to take up firing positions and soon came under RPG fire. The decision was made to conduct the sweep the town from east to west. The town was laid out in a grid pattern, more or less on axis of east/west, so with the Centurions leading the formation, flanked by APCs with mounted infantry the sweep commenced from the main route to the east of the town, through the grid-pattern streets, towards the west. The image (see image Battle of Bin Ba: 2) shows the form up points of the four armoured  callsigns: 21C, 22, 21 and 22B.

The formation was slow-moving, as it seemed the enemy was firing from just about every house. It soon became clear that there was more than just two platoons of Viet Cong. In reality, the village was being held by 1st Battalion, 33rd North Vietnamese Army Regiment, (1/33 NVA) which was well equipped with anti-armour weapons. The RPG-7 rounds, it was found, were capable of penetrating even Centurion armour. Troops were soon ordered out of the village amid concerns they might be ‘stuck in the middle of the village’ and surrounded by the enemy. B Company 5RAR was mobilised from Nui Dat to support troops as they regrouped for a second sweep of the village.

During the action, air support and artillery support proved invaluable. Recconaissance from Army helicopters was able to identify enemy concentrations in the village and in the surrounding rubber plantations while a light fire team (two aircraft) of RAAF helicopter gunships – callsign Bushranger – were very effective in providing air support as infantry and armour re-organised for the second sweep. The RAAF crews did well to also cover the tanks which were immobilised by anti-armour fire and which were at risk of being overrun. The image (see image Battle of Bin Ba: 3) shows a RAAF Iroquois approaching Binh Ba from the south a few months after the battle. The layout of the village can be seen quite clearly as well as the surrounding rubber plantation. 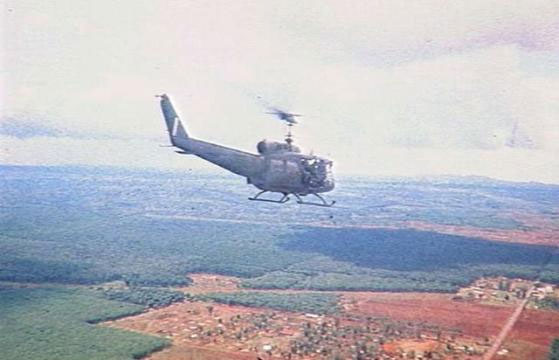 With the re-org of infantry and armour conducted the second sweep was to commence, this time from west to east, and this time with infantry dismounted. Further armoured callsigns joined the battle to replace the tanks that were disabled in the first sweep. The image (see image Battle of Bin Ba: 4) shows callsign 24A with dismounted infantry conducting the second sweep.

RAAF on way to Battle of Binh Ba

The Centurions’ long barrels proved effective in assisting with house clearances. A high explosive round would be fired that would blast a hole in the building after which a canister round would be fired and then the building raked with machine gun fire. After this, the infantry would clear the remnants of the building. Most of the buildings had a small bunker contained therein, usually built by the occupants for protection against air attack. These bunkers now proved to be hiding places for enemy soldiers from which they could fire upon the Australians as they entered the houses. The infantry was required to clear the rooms as well as these bunkers.

This second sweep was successful in neutralising most of the enemy forces, however the Australians were still not satisfied that the village had been cleared and, exhausted, harboured nearby for the night. Some enemy troops that tried to escape through the Australian lines under cover of darkness were neutralised.

Early the next day, fighting began in Duc Trung, a small hamlet a few hundred metres north of Binh Ba. B Company was deployed to support a South Vietnamese unit as it conducted its assault. But the worst of the fighting was over. A final sweep of Binh Ba was conducted at 8:00 am. The bodies of enemy dead were laid out in front of the schoolhouse upon the request of the Vietnamese district chief. 5RAR recorded 51 enemy killed and 11 captured. The Australians had lost one man – Private Wayne Teeling, who had been shot by the enemy during the second sweep – and sustained 11 other casualties. Despite the prior warning to evacuate, a small number of civilians had also been caught in the crossfire.

By 9:00 am the Australian Civil Affairs Unit began assisting in the resettlement and rebuilding of the village. It was a task that would take four and a half months. The battle would constitute one of the major engagements for Australians in Vietnam. It was also one of the few examples of Australians engaging in urban warfare in Vietnam. 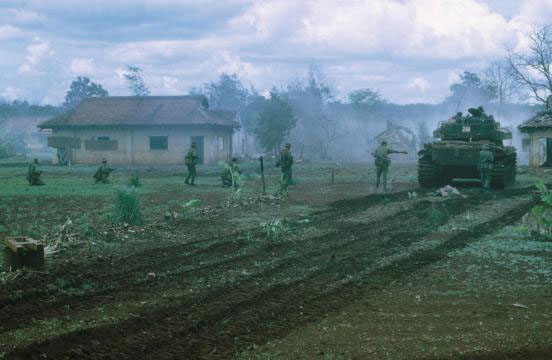 The lessons learned from the offensive on the village, particularly in the collaboration between infantry and tanks, would prove invaluable. Although the North Vietnamese Army was learning that short-range attacks with RPGs could severely damage the Centurion, the presence of tanks had undoubtedly kept infantry casualties low, and had reasserted the need for training in infantry-tank cooperation. In 2007, then Chief of Army Lieutenant-General Peter Leahy would use examples of battles such as this one to argue that tanks remained an essential part of Army capability. The Hopkins’ history of the armoured corps later called the action ‘armour’s greatest day’ in Vietnam.