The VVMC - Gippsland Chapter came into being to give more Vietnam Veterans
the opportunity to be part of the VVMC in Victoria.

At no time with malice, a member of the Victorian Chapter, with the assistance of other bike riding
Vietnam Veterans, started the process of getting the acceptance of the
Vietnam Veteran M.C. chapters around Australia.

Other M.C. clubs were also notified of the intent to start a VVMC chapter in Gippsland,
receiving only positive feedback.

On the 15th of August 2003, with six riding Vietnam Veterans, the Gippsland Chapter was
accepted by all VVMC chapters and was ratified on the 21st February 2004 by the Presidents
of all the chapters of the VVMC.

In August 2004, a building in Rosedale was acquired and modified to suit the needs of the Chapter.

Then in January 2006 after the needs of the Chapter changed,  the members went in search of a new club house.  We found an old disused and dilapidated hall in Longwarry Nth.  After several months of  submissions by our  Members, discussion with State Government Departments, local council and local residents. The perseverance and commitment of the members was rewarded. On the 30th of August 2006 we were granted a permit and license to use the premises.

It is now more than a Club House it is a home for the members, also a drop in centre and
pension office for all Veterans and their families.

Since the move to Longwarry north the Chapter has become heavily involved with the local community.
We have donated funds to the local CFA, SES and other organizations in the area

We held a  Kids with cancer fund raiser day at the Club House in 2011 and raised $24,500.00
this money went to Peter Mac and the Children's hospital.

The chapter has renamed itself as of 2022 back to the original club name of
Vietnam Veterans MC Australia, Gippsland Chapter (VVMC).
Supporting all Australian and Allied Defence Veterans.

Can approach  the VVMC Gippsland Chapter and get to know the members.
If it is seen that you could be a benefit to the Chapter and the Chapter to you, and
after certain requirements are met,
your name will be put to the Committee by a Full Member.
A Vietnam Veteran will not get automatic entry to the Chapter, it is earned.

With the return of younger Veterans from various conflicts, the VVMC Gippsland Chapter
welcomes these men to spend time with like minded fellow veterans .

The Gippsland Chapter recognises Veterans in accordance the the Australian Government's Bill:

The bill: provides a general recognition of veterans and their families; sets out the Australian Defence Force Covenant; provides statements that veterans' affairs portfolio legislation will be interpreted with a beneficial intention and that the Commonwealth is committed to working cooperatively with veterans, their families and ex service organisations to address issues facing veterans; and provides that the Commonwealth may issue pins, cards and other artefacts to veterans and their family members.

"veteran" means a person who has served, or is serving, as a member

of the Permanent Forces or as a member of the Reserves 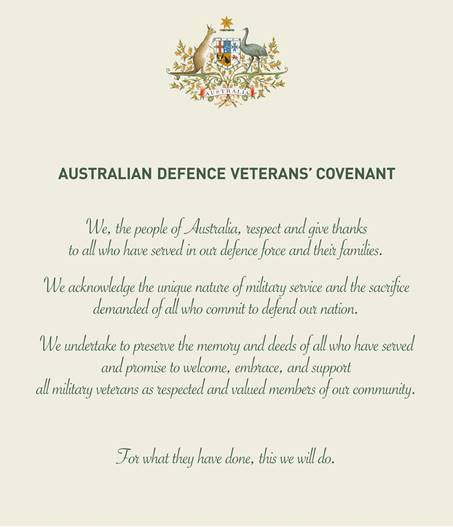 The  COLOURS are worn with pride and will only be presented to a full riding member after he has proven to the committee and other members that he is worthy to wear the colours. The colours are symbolic in that they represent not only mates lost but also those still living,

who must go on in their memory.

on his person or on a bike or car the Vietnam Veterans MC Australia patch.

on his person or on a bike or car the Veterans MC Australia patch.