At 11.00am on 11 November 1918, the guns on the Western Front fell silent after more than
four years continuous warfare. 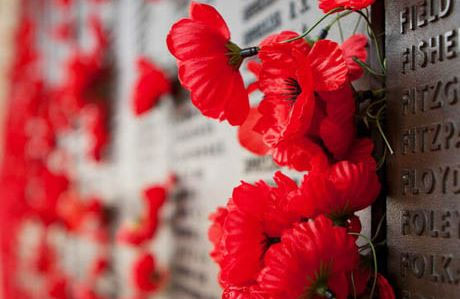 November 11 is universally associated with the remembrance of those who had died in the First World War.  This conflict had mobilised over 70 million people and left between 9 and 13 million dead and as many as one third of these with no grave.  The allied nations chose this day and time for the commemoration of their war dead.

On the first anniversary of the Armistice, 11 November 1919, two minutes' silence was instituted as part of the main commemorative ceremony at the new cenotaph in London.  The silence was proposed by Edward Honey, an Australian journalist working in Fleet Street.

Poppies in wall of names

At around the same time, a South African statesman made a similar proposal to the British Cabinet, which added its endorsement.  King George V personally requested all the people of the British Empire to suspend normal activities for two minutes on the hour of the Armistice ‘which stayed the worldwide carnage of the four preceding years and marked the victory of Right and Freedom’.  The two minutes' silence was popularly adopted and became a central feature of Armistice Day.

On the second anniversary of the Armistice, 11 November 1920, the commemoration was given added significance with the return of the remains of an unknown soldier from the battlefields of the Western Front.  Unknown soldiers were interred with full military honours in Westminster Abbey in London and at the Arc de Triomphe in Paris.

In Australia, on the 75th anniversary of the Armistice 11 November 1993, the remains of an unknown Australian soldier, exhumed from a First World War military cemetery in France, was ceremonially entombed in the Australian War Memorial.  Remembrance Day ceremonies were conducted simultaneously in towns and cities all over the country, culminating at the moment of burial at 11.00am and coinciding with the traditional two minutes silence.

Four years later, in November 1997, the Governor-General, Sir William Deane, issued a proclamation formally declaring the 11th of November as Remembrance Day and urged all Australians to observe one minutes' silence at 11.00am on 11 November each year to remember those who died or suffered for Australia’s cause in all wars and armed conflicts.

This year, we commemorate the 100th anniversary of when the guns on the Western Front fell silent and reflect on the significance of that event. We also pause to remember all men and women of the Australian Defence Force who have made the ultimate sacrifice.

We will remember them. Lest we forget.

The Ode comes from For the Fallen, a poem by the English poet and writer Laurence Binyon and was published in London in the Winnowing Fan; Poems of the Great War in 1914. The verse, which became the League Ode, was already used in association with commemoration services in Australia in 1921.

Each year after Anzac Day and Remembrance Day debate rises on the word 'condemn' or 'contemn'. The Ode used is the fourth stanza of the poem For the Fallen by Laurence Binyon and was written in the early days of World War One. By mid September 1914, less than seven weeks after the outbreak of war, the British Expeditionary Force in France had already suffered severe casualties. Long lists of the dead and wounded appeared in British newspapers. It was against this background that Binyon wrote For the Fallen. The poem was first published in The Times on 21 September 1914 using the word 'condemn'. Some people have suggested that the use of 'condemn' in The Times was a typographical error. However, The Winnowing Fan, published a month or two later and for which Binyon would have had galley proofs on which to mark amendments, 'condemn' was again used.

The British Society of Authors, executors of the Binyon estate, says the word is definitely 'condemn', while the British Museum, where Binyon worked, says its memorial stone also shows 'condemn'. Both expressed surprise when told there had been some debate about the matter in Australia. The condemn/contemn issue seems to be a distinctly Australian phenomenon. Inquiries with the British, Canadian and American Legions revealed that none had heard of the debate.

'Contemn' is not used in Binyon's published anthologies and the two volumes set, Collected Poems, regarded as the definitive version of Binyon's poems, uses 'condemn'. The Returned and Services League handbook shows 'condemn' and a representative of the Australian War Memorial said it always used 'condemn' in its ceremonies.

In military tradition, the Last Post is the bugle call that signifies the end of the day's activities. It is also sounded at military funerals to indicate that the soldier has gone to his final rest and at commemorative services such as Anzac Day and Remembrance Day.

The Last Post is one of a number of bugle calls in military tradition that mark the phases of the day.

While Reveille signals the start of a soldier's day, the Last Post signals its end.

During the evening, a duty officer moved around his unit’s position checking that the sentry posts were manned and sending the off-duty soldiers to their beds. The ‘first post’ was sounded when the duty officer started his rounds, while a final bugle call indicated the completion of these rounds, when the last post was reached.

In Flanders fields the poppies grow

Between the crosses, row on row,

That mark our place; and in the sky

Scarce heard amid the guns below.

We are the Dead. Short days ago

Loved and were loved, and now we lie

Take up our quarrel with the foe:

To you from failing hands we throw

The torch; be yours to hold it high.

If ye break faith with us who die

We shall not sleep, though poppies grow

Only those medals, decorations and honours which have been created under the prerogative of the Crown, have official status. Such medals and decorations must be worn in accordance with The Order of Wearing Australian Honours and Awards on the left breast either on an official uniform or civilian dress.

The rule is that war medals should only be worn on the left breast by the person upon whom they were conferred. Technically this honour remains with the individual and does not pass to a widow, parent or relative upon death.

However, if you wish to wear your family medals you should wear them on the right breast to indicate they were not conferred upon you.